In this article, I did the heavy lifting for you by comparing both platforms’ features, pricing, performance, and customer support. AWS came out on top in the end, but Hostinger might still be a great choice for you depending on your hosting needs.

Want to know which of these two is best for you? Keep reading!

Hostinger has server locations in the same regions as AWS, but the latter has more concentrated centers in the U.S.A region. AWS is also much more scalable, flexible and faster than Hostinger. Keep reading to learn more about what each of these hosts offers:

About Hostinger and AWS

Its VPS plans offer a varying amount of bandwidth (up to 4TB) and disk space (10GB). You also get the same features as the web hosting plans. The WordPress plans grant you up to 200,000 monthly visits and 200GB worth of storage plus WP-CLI, a WordPress staging tool, and many more.

AWS offers different features from Hostinger. With their object storage (aka Amazon S3), you get 5GB of standard storage, 20,000 Get requests, and 2,000 Put requests.

For VPS (Amazon Lightsail), disk space ranges between 20GB to 640GB with up to 8 Core processor, 32GB memory, and a 3-month free trial. Also included in all Amazon Lightsail plans is an SSD technology, DNS management, SSL certificates, and 1-click SSH terminal access.

You also have an elastic load balancer (suited for websites and apps that experience huge traffic spikes), serverless computing, and elastic cloud computing.

And the winner is… AWS

When it comes to features, AWS is not like traditional hosts like Hostinger. AWS uses unique, state-of-the-art technology to bring unbeatable security, speed, and performance features to users. AWS is the winner of this round.

Hostinger offers a variety of hosting plans, including Web, VPS, Cloud, and WordPress hosting. Here’s who each plan is best suited for:

Unlike Hostinger, AWS uses a pay-as-you-go payment model on all of its cloud hosting plans. Typically, you pay based on the number of resources you use in a given time period (minute, hourly, monthly, etc).

I personally like AWS’ payment model best. You only get to pay for the resources that you use. This is in contrast to Hostinger where you have to pay a fixed price regardless of how much resources you end up using.

Speed and uptime are two key metrics for measuring a website’s performance. Basically, uptime tells you how long the host’s server stays up and running. So the higher the uptime, the better for you.

Your website loading speed is also one of the main metrics that search engines use to rank your website and depends on your server’s response time. If the speed is high, you rank high in search results, meaning more business for you. Over to Hostinger vs AWS

I used two performance testers – GTMetrix and Google PageSpeed Insights – to test the speed and performance of the hosts’ domains (I expect their domain to be hosted on their servers) and the results are as follows:

On GTMetrix, Hostinger had an overall performance of 90% and a time to first byte (TTFB) of 524 ms:

Google PageSpeed Insights showed a performance score of 88% and 780ms as the TTFB:

To test the speed and performance of AWS vs Hostinger, I ran the same tests on AWS’s domain and the results were better. Let’s see: 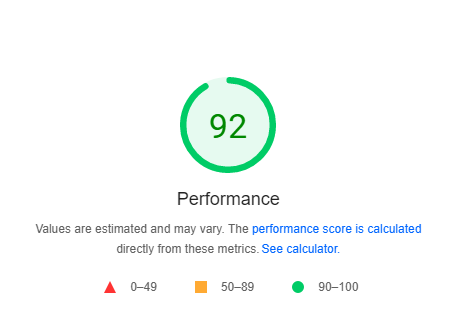 This doesn’t come as a surprise to me. The core mission behind AWS is superior speed and scalability. Not many traditional hosting platforms can beat the high speed that AWS provides.

Round 4: Customer Support – Who Has the Best Support System?

You can contact Hostinger’s support team via live chat and email. However, you’ll not be able to use the live chat option unless you’re an active customer and signed into your account as a customer.

Other support options are YouTube guides, tutorials, a knowledgebase, and blog.

You can learn more about Hosting from their ‘find out more’ portals:

Their knowledgebase is also packed with so much information. You can use the search bar to filter out the results that match your current queries to the letter.

Their YouTube channel, ‘Hostinger Academy’, is also a great way to learn if you’re a visual learner: 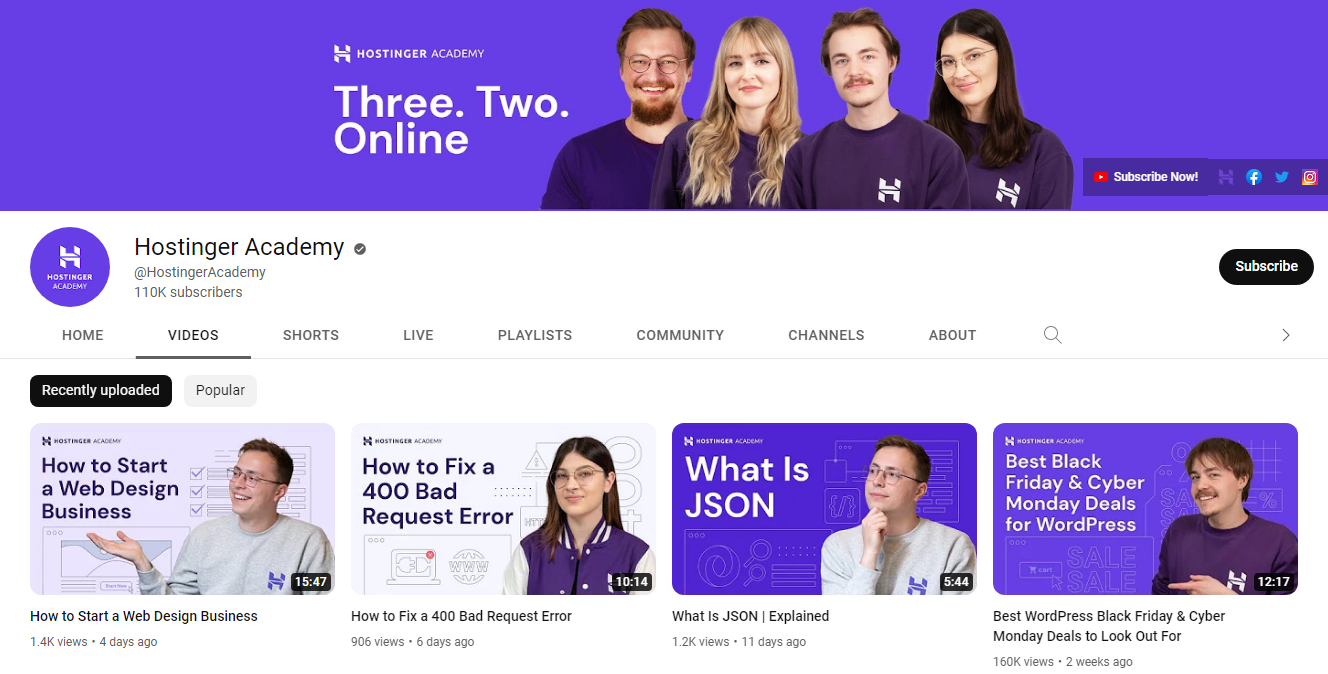 AWS supports the same channels that Hostinger does, plus telephone. Live chat sessions are held with AWS agents using the Slack application. 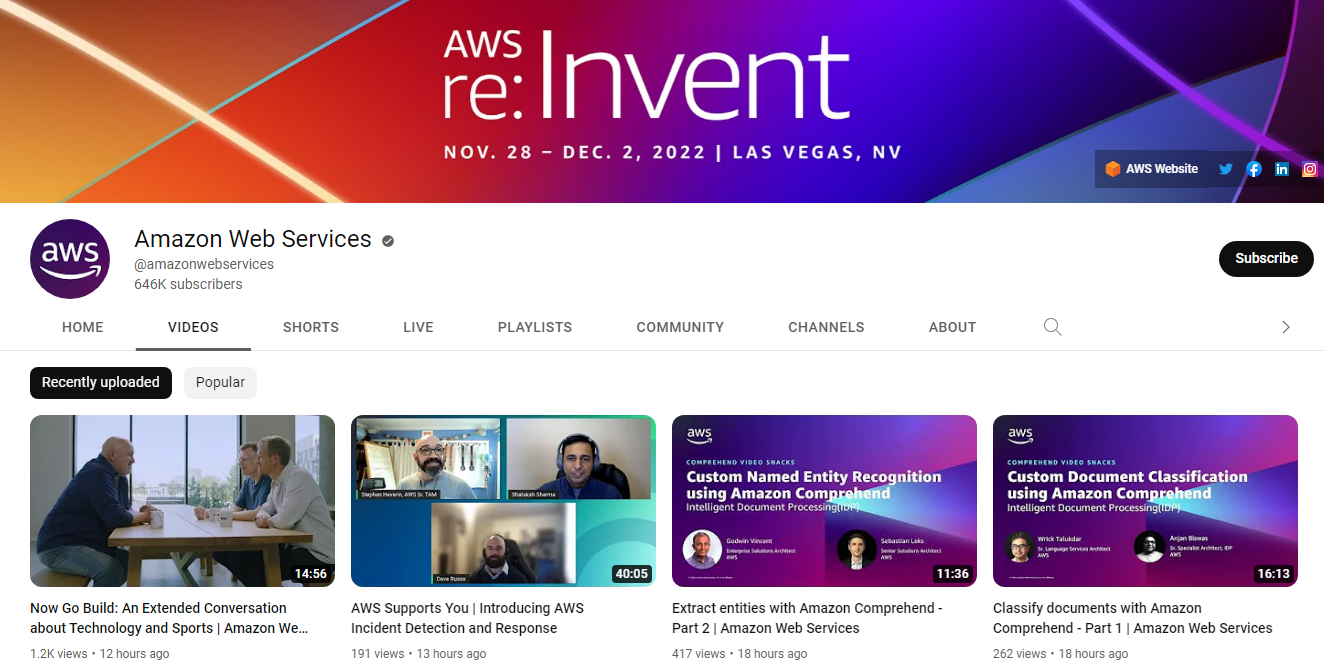 Their YouTube is your go-to place for all tutorials and guides related to any of AWS’ products and services.

This was a close one. But AWS wins with telephone support.

Round 5: Ease of use – Which Platform Is Easier to Use?

Hostinger Ease of use

Hostinger’s user interface is very intuitive to navigate and comes with a beautiful theme. The homepage offers important hosting details as well as links to their various hosting plans.

Hostinger also offers a branded cPanel (hPanel) that makes it super intuitive for customers to manage their website.

I personally like the clutter-free design of the hPanel. There are also a ton of apps and integrations that make managing your website a total breeze.

AWS Ease of use

AWS features an appealing dark theme that makes their text pop. Their UI is very intuitive to navigate, and their homepage is set up so that you can easily access any section you’re looking for.

AWS supports the official cPanel and WHM AMI which includes email management, domain management, and enhanced security. It’s also very customizable (customizing the panel can be quite confusing if you’re new to AWS): 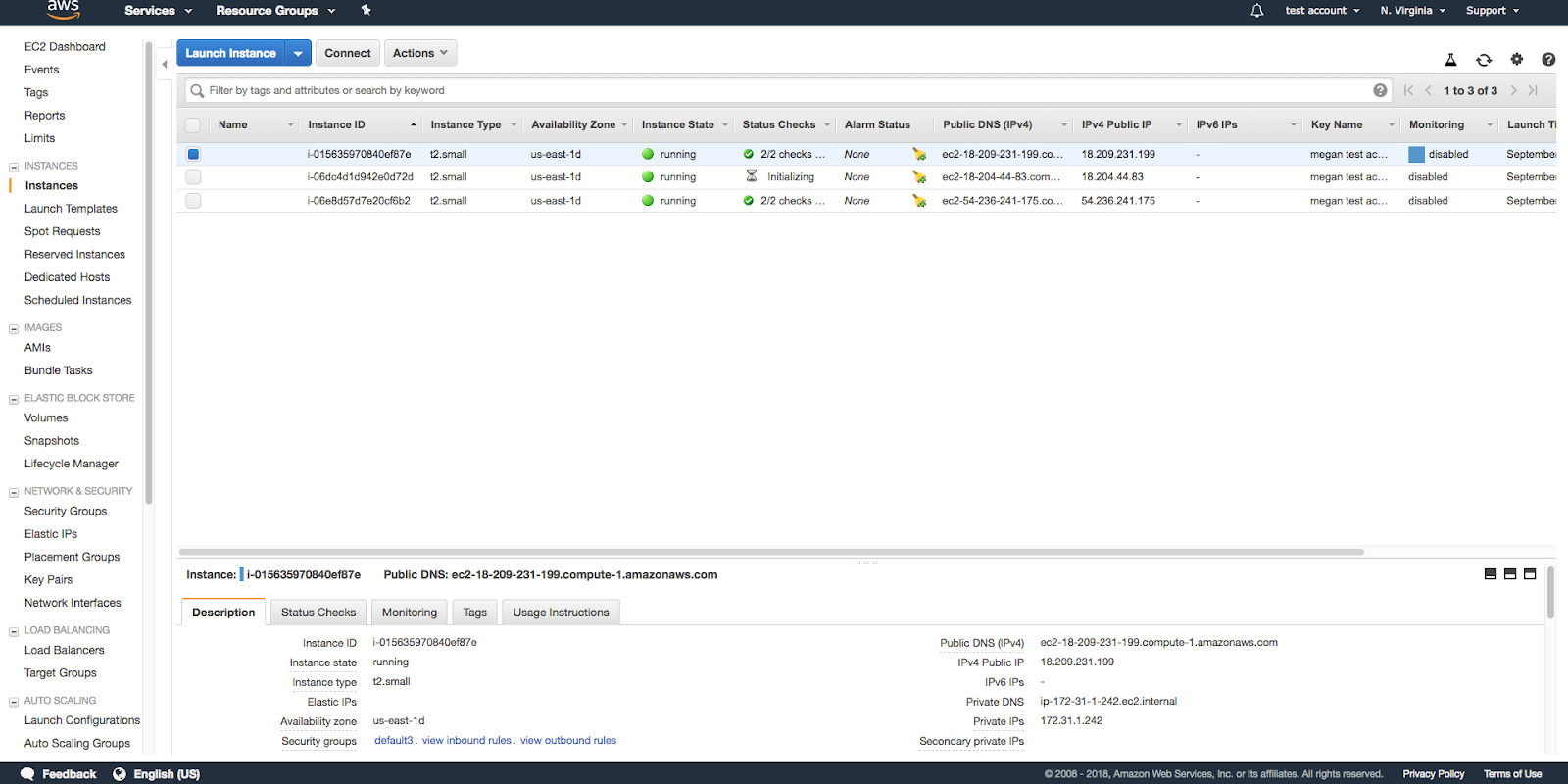 I have to restate that AWS’s cPanel can be difficult to navigate if you’re not familiar with hosting backends. By contrast, Hostinger’s cPanel is much more intuitive which is expected given it’s a traditional hosting platform. To the right person, AWS cPanel can be a powerful tool for managing and optimizing your website.

Round 6: Security – Which Platform is More Secure?

Straight out-of-the-box, Hostinger provides all the necessary security features needed to protect your site. This includes a free SSL certificate, DDoS protection, and Cloudflare on all its plans to safeguard your data.

For higher-up plans across Web, VPS, WordPress, and Cloud hosting, you get daily backups and other advanced security protections. Also included are a malware scanner, web application firewalls, and SiteLock protection.

AWS touts itself as having the most secure cloud infrastructure, for good reason. They operate on the highest standard of data privacy and security.

When it comes to security, AWS operates on a far higher level than conventional hosts like Hostinger. Though Hostinger’s security features are top-notch, they’re no match for AWS.

If you want to widen your website’s global presence, then you must consider the server locations of your host company. You’d want your web host to have as many servers as possible globally. This results in quicker load times, and in turn, higher search rankings and more business for you.

To achieve wider global coverage, you can connect your hosting account with CloudFlare and tap into high-speed CDN technology. 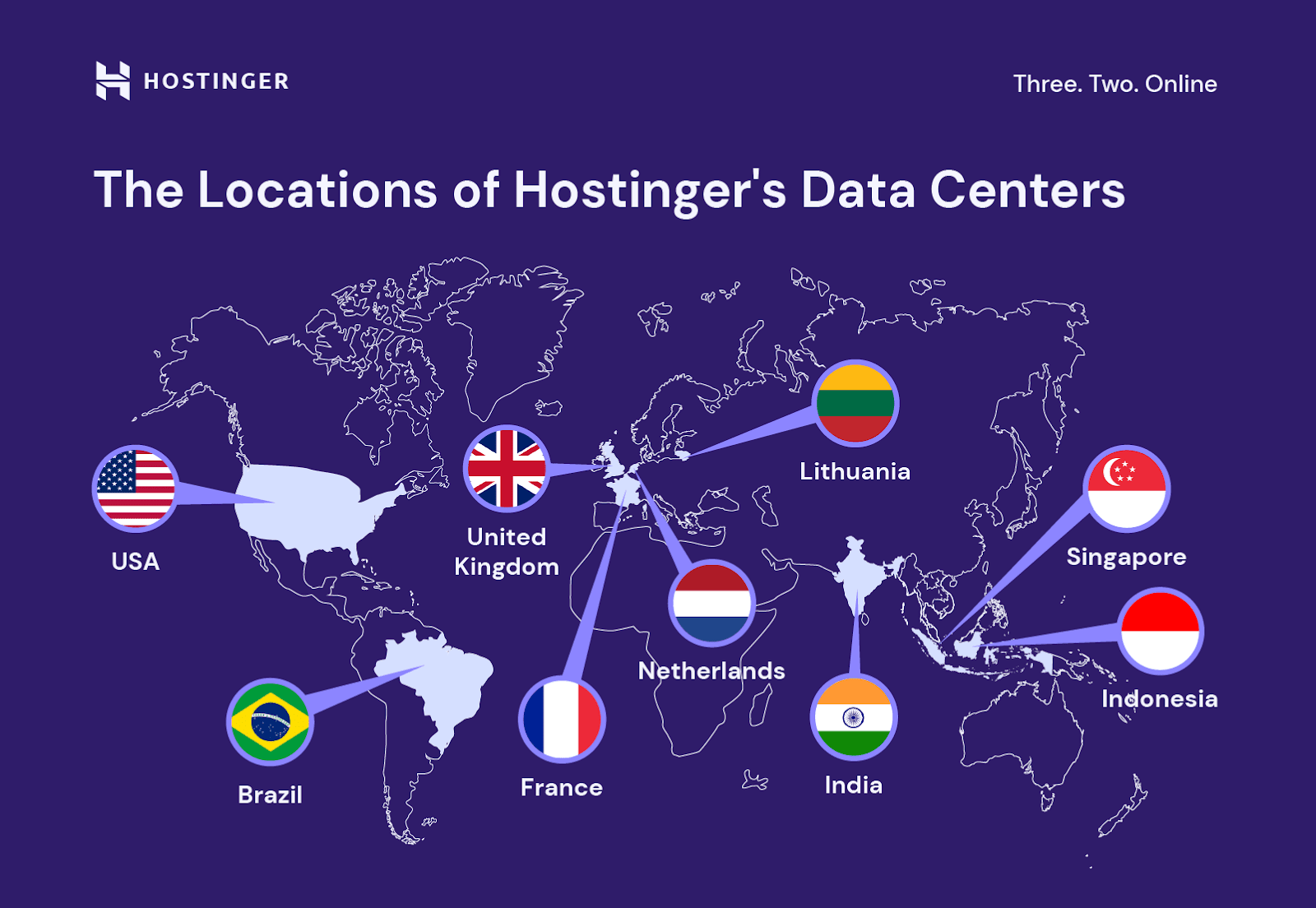 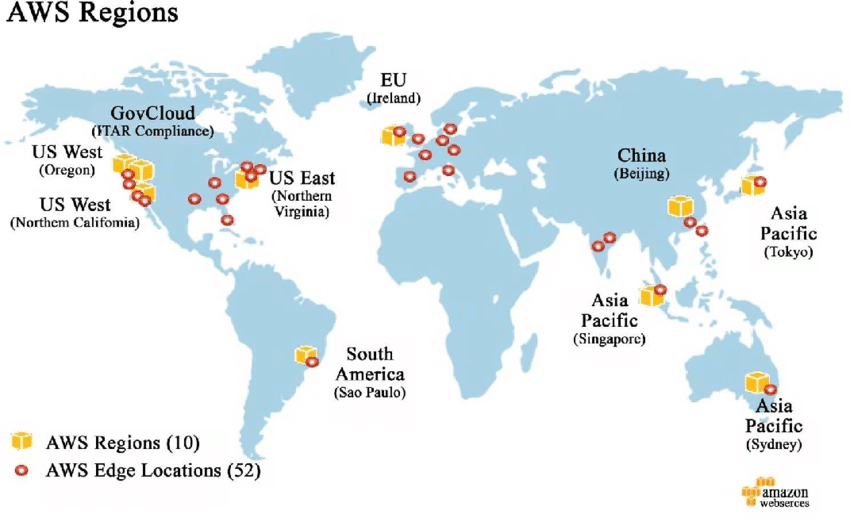 Both AWS and Hostinger have data centers on four continents – Asia, Europe, North America, and South America. However, AWS has more server locations than Hostinger (especially in the U.S.A and UK) with a total of 52 edge locations globally.

When to Choose Hostinger?

Hostinger is one of the best hosting platforms in the market today. They offer a wide variety of hosting plans under the web, VPS, cloud, and WordPress hosting categories. But it doesn’t just stop there. Here are some other good reasons to use Hostinger:

When to Choose AWS?

AWS is the most popular cloud platform in the world. They provide a wide range of services including cloud computing, serverless computing, load balancers, and VPS servers. Reasons to use AWS are:

This comparison is between a traditional web host and a cloud host, so it’s not exactly evenly matched. However, for the following reasons AWS came out on top.

With traditional hosts like Hostinger, you get all the different kinds of hosting, with specialized ones like Cloud hosting for scalability. AWS, on the other hand, is built exactly for scalability and can automatically add extra bandwidth if it notices an increase in traffic. This makes it more efficient than Hostinger.

1. What is the difference between AWS and Hostinger?

Hostinger is a traditional host. Whereas, AWS is a cloud host. As a cloud host, AWS doesn’t dedicate a specific amount of resources to each plan. Instead, it automatically allocates resources based on real-time demands. This means AWS is much more efficient than Hostinger.

2. Is Hostinger cheaper than AWS?

Hostinger offers the most affordable hosting plans in the market. For just $1.99 per month, you can host your website on Hostinger (with limitations, of course). AWS uses a pay-as-you-use model. The amount you pay is based on the total amount of resources you use over a period of one month or year.

3. What are some great Hostinger and AWS alternatives?